To help stimulate children’s imaginations, here are some new projects involving animation films and videos as well as a groundbreaking augmented reality experience:

The Inventor by Jim CapobiancoJim Capobianco, of Ratatouille fame, is making a new stop-motion animation film about the life of Leonardo da Vinci.

The Inventor will tell the story of Leonardo’s time in the French court, where he was free to unleash the full power of his incredible imagination–from flying machines to the human body–in a humorous and inventive story for the whole family.The movie, to be voiced by Stephen Fry and Star Wars actor Daisy Ridley, is being made completely independently and hit its initial $50,000 fundraising target in just 12 hours.

The project brings together the people who have been behind some of the greatest animated films of recent years including Isle of Dogs, The Nightmare Before Christmas, Song of The Sea, Fantastic Mr. Fox and The Lion King.

The money raised so far will pay for The Animatic, the blueprint that guides all of the craftspeople who work on the film. Supporters of the film will get a host of rewards including exclusive artwork, signed illustrated scripts, behind-the-scenes tours, animation masterclasses, exclusive film credits and could even appear in the film.

If you would like to support The Inventor and be part of the next stop-motion animation hit film, go to https://www.kickstarter.com/projects/77077682/the-inventor

Moonbug, a global entertainment company that develops and distributes values-based content for kids, and Jazwares, a global leader in play, have teamed up to create a line of recently released toys inspired by the universally relatable musical and educational 3D animated video series CoComelon. Available on Netflix and YouTube, CoComelon is the #1 most-watched channel on YouTube with over 3.5 billion monthly views.

CoComelon‘s beautiful 3D animation and toe-tapping songs create a colorful world that centers on the everyday experiences of young children, and millions of kids laugh, dance, sing and play along each day. In addition to helping preschoolers learn letters, numbers, animal sounds, colors and more, the upbeat 3D animation videos gently impart positive, prosocial life lessons, providing parents with an opportunity to teach and play with their children as they watch together. 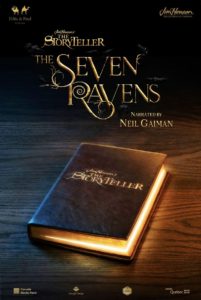 The Jim Henson Company, a renowned leader in family entertainment, and Felix & Paul Studios, leaders in immersive storytelling, have a new project in development: The Storyteller: The Seven Ravens, a groundbreaking augmented reality (AR) experience. The new chapter of Jim Henson’s classic The Storyteller will be an innovative addition to the acclaimed television series, in the form of an augmented reality (AR), trackable storybook. Award-winning author Neil Gaiman (Anansi Boys, The Graveyard Book) will voice the role of the narrator.

The Storyteller: The Seven Ravens is an extension of The Jim Henson Company’s popular franchise, which re-envisions folk stories, legends and fables from around the world. In The Seven Ravens, a young girl sets out on an adventure to save her seven brothers from a curse that turned them into ravens. The AR book experience will allow people to interact with, explore and re-explore the detailed and robust world of The Storyteller through the lens of The Seven Ravens tale.